The object of my love 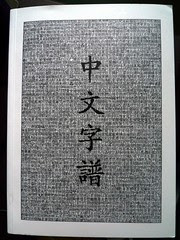 The object of my love
Originally uploaded by ulysses68
It's not common for a book to inspire such abject love, but I am in total agreement with the photographer and (I assume) fellow student of Mandarin.

The object of my love is Chinese Characters - A Genealogy and Dictionary, by Rick Harbaugh. I discovered this dictionary 10 years ago in Caves Bookstore, and subsequently wore my way through two copies, spending many happy, sun drenched afternoons in coffee shops, too interested in what I was reading to notice that I was, in fact, studying.

Character Pronunciation
English -Chinese
Word Pronunciation
BPMF
Radical
and, as a last resort
Stroke order (which actually can be quite painless if you know how to count your strokes correctly)

Using the various indexes above, within a few months of discovering this dictionary, I was able to find absolutely ANY unfamiliar character in under a minute.

What makes this etymological dictionary so ingenious is the author's use of character "trees". The easiest way to find a new word is to look up a character (using the character pronunciation, i.e. the BPMF sound) that looks similar to the unfamiliar character.

Here's an example of how spending a few minutes with this book quickly turns into a few engrossing hours:

Faced with the character 鞍, I look for a word/element that I know within it. In this case, I choose 女or 安, either of which end up leading me to the same tree: 女(woman) at tree 54. 安 (peace) is 54/10, and just a little further down the branch, we find 鞍(saddle) at 54/13. 鞍 is pronounced "an1" and takes its phonetic component from 安, not from its radical, which the dictionary helpfully informs me can be found at 74/2.

I don't know much about this character, but have seen it at the side of many characters, and flip to 74/2 to discover that 革 (leather) is the left-side radical for many words, including 勒, a character which has a component I recognize, 力. I am curious to see what the combination of 革(leather) and 力(strength) mean, and turn to 34/13 to find out, and see that 力is actually a pictograph of a tendon (31/1) and 勒 is "leather that works like a tendon" = bridle; to force; and to tighten, and is part of the compound word le4suo3 勒索 (to extort).

In the list of compound words above in which 力 is the second character (there are 57) 魅力jumps out at me. I sort of recognize the first character, so I flip to 77/36 to see what it means. As it turns out, 魅 means "demon; elf" and 魅力 means charisma ("demon strength")

You can check out the online version here, which is a handy resource, but not as much fun as the real book, which is just an invitation (paraphrasing Old Walt) to lean and loafe with a book rightfully deserves all the praise that has been heaped upon it.
Posted by Maureen Kealy at 11:07 PM